Almost a full year since I posted last. Haven't been painting much, but here are eight that I finished...
at 2:20 PM No comments:

Vikings and Gaels and Harpies, a Dwarf Wizard, Normans and a woman with a child

So I've been painting miniatures on and off and finally I got around to photographing them. As you can tell from the title, it's a bit of a random assortment.

They all seem to be brawling over control of a small Dark Age style hovel.

I still have to varnish the minis, but otherwise they are done.
at 3:58 PM 2 comments:

Setting Out in Search of Adventure: Chapter 1 Fiction


Yesterday I posted the characters for the OSR-as-minis-skirmish-game I'm about to run for my wife and son.

Today I'm posting the fiction. Basically what I'll do is read it out loud, much like I'm reading a few chapters from a book, and then transitioning into the game.

Keep in mind that in terms of sophistication, this is aimed at a six year old.

Setting Out of in Search of Adventure

A little while ago I told my son (6 years old) and my wife to each select a miniature. The idea is that I'd stat them up and then run some OSR derived skirmish battles for them, while hopefully linking the games with a narrative of sorts.

It took me longer than I liked to stat the characters up, in part because I kept trying to get everything "just so" for my large OSR-as-a-minis-game project and developing set of homebrew rules for a potential RPG campaign. Then I stopped trying and got the stats done, which is better.

Now all we need to do is play the first game, which we'll do real soon. Like, we were going to do it today but then my wife's cousin and her family came over and I had to grill them some burgers. I also ended up having another commitment in the afternoon. So that didn't work out. Luckily, I hadn't promised anything except to myself, so I'm the only one who was disappointed.

Anyhow... my son picked an old citadel wood elf (Skarloc) with a big sword ("he must do a lot of damage") and bow ("and he can shoot"), and named him Bravery. 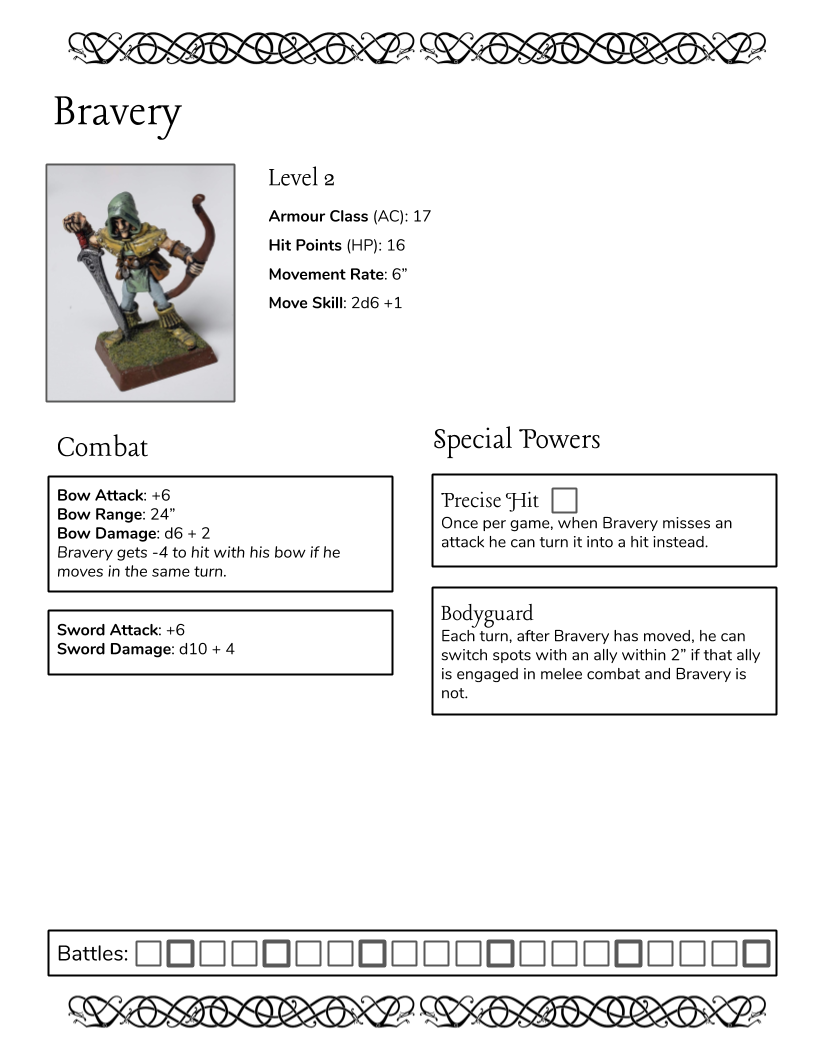 My beloved wife picked a Reaper mini, I think primarily because in her opinion the dress makes it the prettiest female mini I've painted. She was given the name Epiphany. 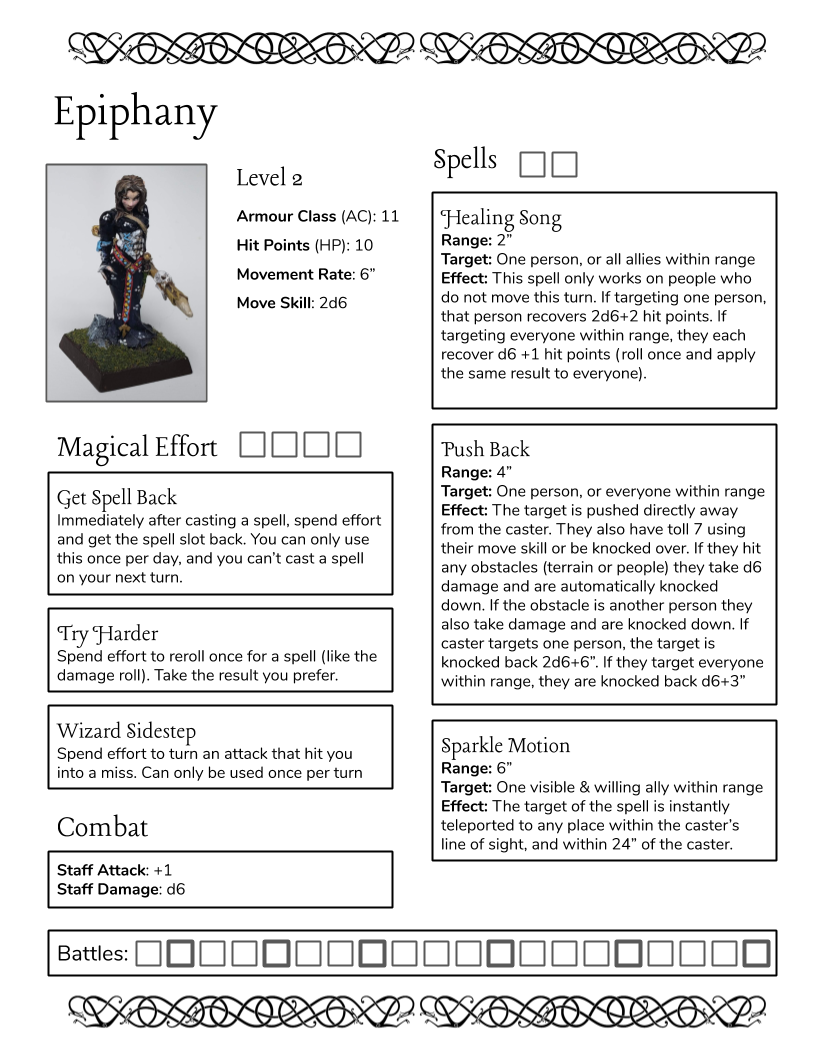 In part the abilities and so on are homebrew adaptations of a beta version of Kevin Crawford's upcoming Worlds Without Numbers. It's reasonably old school, but not quite B/X. I've also tried to put everything on the character sheet, both because it's easier for my player base to engage with and because it's less work than trying to write out the whole homebrew ruleset before we play.

My son also commented something like "imagine we had FIVE friends with us, and they got STRONGER when they work together" which I thought showed excellent early development of leadership skills. It also adds a bit more moving pieces for what is supposed to be an on-ramp to skirmish gaming, and provides an excuse for trying out some of the concepts I'm looking to develop.

I picked five viking minis (no armour) and named them Alfhild, Baggi, Eilif, Finnulf, and Klefi. 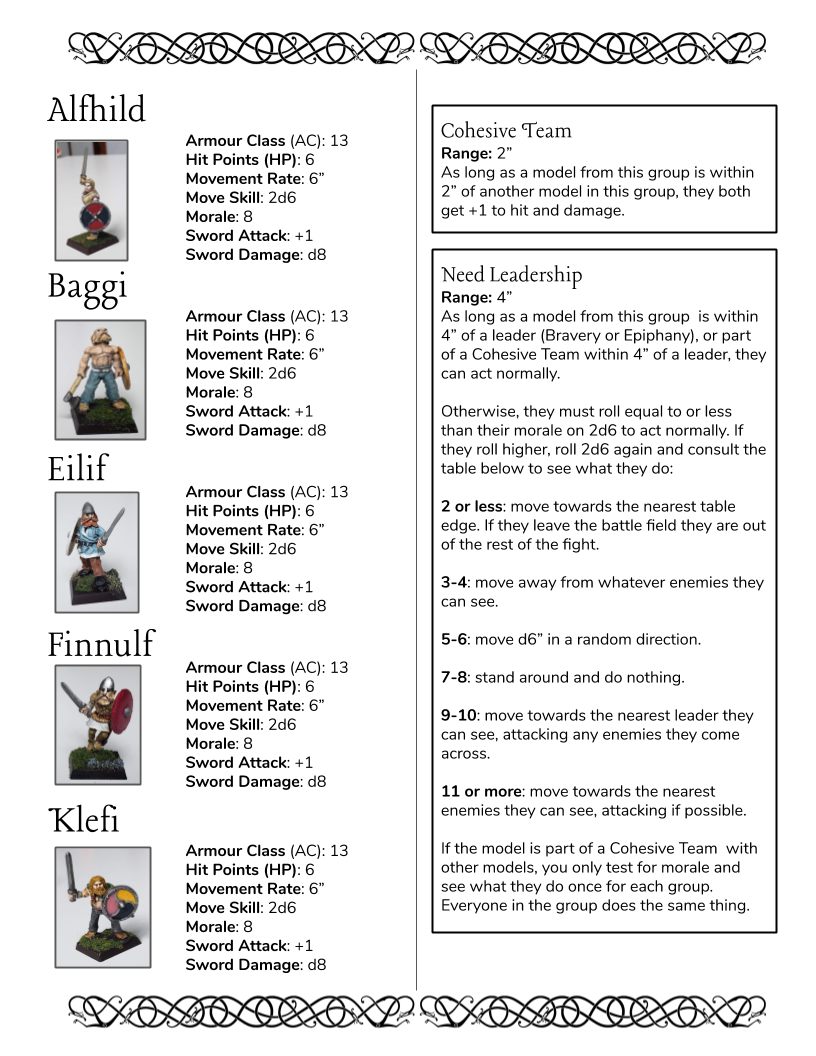 One of the concepts I'm looking at - and will be testing out in this game - is the idea that "regular troops" carry out instructions fine when near a leader. However, if left to their own devices you need a morale check to avoid them potentially showing undesirable independent initiative. It's intended to be a general rule, but in this case I've rolled it into the traits of the unit.

The Five Dwarves, the Mule, and the Beastman

If you go through the Beastwoods, you should expect to meet with those who dwell within. And if you do not have their permission, you could get into trouble. For example, these five Dwarves have just lost their pack mule.


I've painted a few more minis. The Dwarves are new Oathmark plastics. Personally, I enjoy their pseudo-historical Dark Ages styling. The Beastman is an old Citadel mini, and the mule is an even older Citadel mini.


As you can see, I'm going with a mostly blue and yellow scheme for the Dwarves, but not too rigidly. I think early medieval (and early medieval type fantasy) people tended not to be too uniform in their gear. It turns out I also enjoy painting individual minis more than I enjoy painting "units", so theory and practice go together in happy unity in this case.

I also painted some fantasy minis.

Next up a Reaper earth elemental and two Celtos Gaels. The Celtos range has some women warrior in bikinis that I really like, but they are - as we say these days - a bit problematic. My current approach is to field a roughly equal number of more-or-less equally undressed male and female minis for a given faction and say that the nudity/ near nudity is a cultural thing independent of gender... but I'm having a harder time finding sexy dude warriors for some reason.

Finally, a fountain from the Reaper Bones first Kickstarter. I tried using clear acrylic medium and painting to suggest water with depth and I was really happy with it. Then I varnished it (matte varnish) and the water effect went all translucent grey. Maybe I'll try to fix it....

The woman is a Hasslefree mini and the trunk is from the D&D Nolzur line.

A Small Wave of Normans

I painted some Normans. Maybe they'll fight some of the vikings or even show up in a fantasy game some time.

I'm (obviously) going for a red and white theme for these knights. The minis are the familiar (to collectors of 28mm Norman miniatures) Conquest plastics.


But as we all know, sometimes the Normans fought on foot. Attempting to reflect historical reality I managed to paint a small handful of Norman infantry as well.


Still going with the red and white scheme, as you can see. If I recall correctly, they're all old Citadel historicals from the pre-slotta days. Pretty sure they're lead and everything.